(January 25, 2011)
Wow, what a week in comics. First we have news of the villains from the third Batman film..THE DARK KNIGHT RISES, then both DC comics and Archie discontinue using the Comics Code Authority, then Wizard Magazine and Toyfare cease publication, and finally SPOILER ALERT: Marvel Comics kills the Human Torch in Fantastic Four 587 ON SALE TODAY. Just an amazing amount of news from our industry and we haven't even finished the first month of the year.
Well on to us here in the studio:
If you check out the new blog, you will notice I have added Google Talks chat engine in the blog. Log in using your gmail account and talk to us if we are online. This is just one more step to get us closer to you. Also the store is updated again with new title placement for Nova City Stories. Now about those books:
I recently finished Femme-Noir: Chamber of Horrors and am now working on finishing Femme-Noir: Dead Fingers. I'm also working to finish up that secret project of mine. Let's just say I'm halfway.
Lyle, the workhorse of us all is currently working on Tribulations #3 and the Dead Don't Sleep #2. As for the fate of Nova City Stories...I have stepped aside on the colors due to my workload and newcomer Rob Hawkins is coloring the series. I must admitthe guys colors are great.
John is working on the Infinites as usual, and Kenny is still working out details on his relaunch of Slayer and his next installment of his Horror Anthology.

That's all for now, special congrats to Johnathan Hickman, whom I survived a FCBD with at Acme Comics on his success with Fantastic Four. He is an amazing talent in our industry so check out what he is doing to Marvel's first family

Till next week.
-Michael
Posted by Michael Watkins at 11:50 AM No comments:

The end of the Comics Code Authority!

It's great to see that something I spoke out against in college is finally gone. The "archaic" Comics Code Authority that redefined the landscape of the comics industry in 1954 finally bit the bullet a few days ago. DC comics and Archie Comics both announced with in a day of each other that they would no longer use the Code to "police" the material in the books they publish.

For those of you new joining us, the Comics Code Authority was established in the 50's due to Fredric Wertham's book Seduction of the Innocent, which more or less pointed at comics for the downfall of civillization and children everywhere. See in the early 50's horror, crime, and monsters ruled the world of sequential art, superheroes were in the landscape, but borderline gore was king and it wasn't about to share it's throne with anyone. So, along comes Wertham's book and suddenly there is a Senate Subcommitte on Juvienille Delenquiency founded...yep comics were so dangerous that the Senate was involved. The Senate hearings had to find one focal point to make an example out of comic publishers and unfortuate for EC Comics and Bill Gaines, the Senate had it's sites set on them. EC was known for titles such as Tales of Suspense and the most famous amongst youth, Tales from the Crypt.

By the end of the hearings, Gaines was given such strict guidelines that EC folded and superheroes became the forerunner of the comics landscape. Not until Stan Lee ran 3 issues of Amazing Spiderman focusing on the negative of drug use was the Code challenged. Lee and Marvel publisher Martin Goodman stood up to the Code and published ASM 96-98 with out the CCA on the cover.  The CCA eventually changed some rules on the depiction of drug use allowing DC to run the famous Green Arrow story with the Emerald Archers sidekick Speedy becoming an addict.

Fast forward to 2001 when Marvel offically kicks the Code out leaving DC and Archie the last major publishers using the code. Now as of this week both DC and Archie have dropped the Code and adopted an internal ratings system.

In closing, somewhere Bill Gaines is smiling, knowing his fight is finally over. His tales of morality with twists of humor and some gore still exist today, and honestly they taught you to take a look at the "monsters" with in yourself. To paraphrase the Crypt Keeper.."Well kiddies remember big brother is always your friend if you AXE him nicely...HAHAHHAHAHA!"

Email ThisBlogThis!Share to TwitterShare to FacebookShare to Pinterest
Labels: Comics

So after nearly 20 years of Wizard Magazine...poof the Wizard is gone. Wizard World announced today that Wizard Magazine and Toyfare will cease publication immediately. All of Wizards staff and freelancers were layed off effective today and CEO Gareb Shamus issued the following statement. What most people are finding strange is that Wizard magazine was not even discussed in the statement.


GAREB SHAMUS UNDERTAKES PUBLIC COMPANY WIZARD WORLD, INC. AND LAUNCHES NEW ONLINE PUBLICATION ‘WIZARD WORLD’
New York, NY (January 24, 2011) – Gareb Shamus, recently appointed President and CEO of public company Wizard World, Inc. (“Wizard World”) (OTC: GOEE.PK), today announced that the Comic Con Tour, which consists of pop culture conference events that provide high visibility marketing opportunities to pop culture brands and companies in multiple venues throughout the year, is now being produced by public company Wizard World. The Wizard World Comic Con Tour intends to cover 12 cities in 2011, including major cities such as New York City, Boston, Chicago, Philadelphia, Austin and New Orleans. The Tour will include sponsors ranging from major movie studios and TV networks to gaming and toy companies to content publishers.
In addition, Wizard World plans to launch in February 2011 an all-new digital magazine called ‘Wizard World’ that will appeal to pop-culture fans, the same audience to which Mr. Shamus has catered to, for over 20 years. Wizard World digital magazine will provide coverage of the world of comic books, toys and superheroes, and the personalities behind them.
“This is a very exciting day for Wizard World and the industries it serves,” said Shamus. “Having the Tour produced by a public company provides additional opportunities to expand and grow the Tour. The new digital magazine Wizard World will give consumers the content they want in a magazine format with which they are familiar, but distributed in a form that is always available at any time on any device. It is a natural evolution for us in this market.” 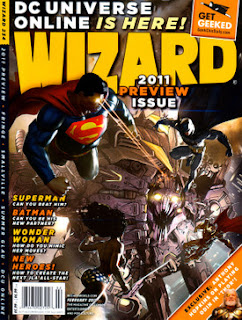 Wizard World Comic Con will begin its North American tour at New Orleans Comic Con held from January 29 to 30, 2011. The full event schedule can be found at www.wizardworld.com.